Did this film come out in 2012 or 2011? I don't remember. But it entered and exited the theater's fast because it was up against another big film if I remember correctly. Anyhoo the film had some terrific production values and I especially enjoyed the director's usage of wide establishing shots of the fictional ancient land known as 'Hyborea' I think (I'm kinda rusty on my Conan lingo). Too many directors underestimate the power of an extreme wide shot to establish a scene (putting the scene firmly into the minds' of it's audience which increases the emotional value of what happens there.) If you haven't seen this film yet (on DVD), then go ahead and give it a try. Don't expect an awe inspiring story thought, and it's got a bunch of logic errors in the very story premise itself. Just watch it for the visuals this time around.
Posted by GB2000 at 10:27 AM No comments:

Toth VS Kirby? Is There A Contest?

I popped in on a website discussing the interconnected value of both Toth and Kirby. Check it out at
http://markbadger.org/?p=536
Posted by GB2000 at 5:42 PM No comments: 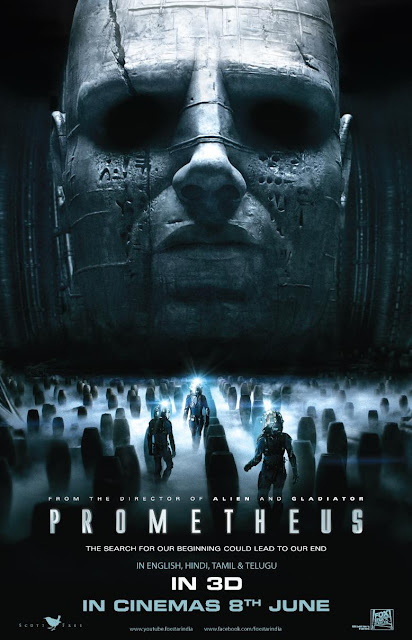 'Prometheus'. 'Prometheus'! Well, what can you say? The film ALMOST delivers a chilling tale of human origins and it's (seemingly) inevitable doom at the hands of the Alien. But the narrative is so disjointed. So lacking in interconnected relevancy (and entertainment value) that you almost don't give a damn if the human race survives or not. Big problem for any visual storyteller: make sure that your audience gives a hyperdrive flyin' F about your characters. Most of the characters in this film were thinly described, cardboard cut-outs of real people. And although some of the plot elements and actions of the characters leave you wondering 'what if' / 'why' after you've seen the movie, you end up shaking your head regarding the whole "beautiful mess" (as one of my friend's called it). A key (and missing) element of the film's plot / character motivation is why the giant humanoid 'men' who's species supposedly created human life on Earth now are hellbent on destroying it. Then add in the fact that they've created and stored a large amount of the Alien life form and are apparently going to take the damn ship to Earth itself. Now through my own thinking I can only come up with one thing -they created life on Earth in order to test out some sort of new biological / species weapon (the Alien)! But this isn't too clear at all during the course of the film. And why go through such and elaborate, eons old process of developing human life just to wipe it out as a 'test'? That could easily be done in a laboratory environment with computer assisted simulations of a planet-wide infestation of Alien creatures unleashed upon some unsuspecting enemy of these giant predecessors of humanity. Like I indicate, this story feels so half-baked that the cook should be slapped for taking it out of the oven too soon. And what's with that giant humanoid at the beginning of the film committing suicide? I suppose he was the last one alive (because the plot indicated that a bunch of his fellow astronauts were wiped out by their own creation -the Alien). But it's all done so cryptically and without a good sense of story element placing, not visual element pacing, that the film leaves you with a dumb and confusing feeling. Not doubting your own intelligence but the filmmakers'.
Posted by GB2000 at 9:52 AM No comments:


If you haven't seen 'Snow White and The Huntsman' then you're missing out on best villain performance of the year by Charlize Theron. Her evil queen character has a fair amount of scenes but what Charlize Theron does with them has to be seen by anyone that loves visual storytelling. Her evil queen is fraught with reflective nuances, canny eye movements, full body acting. She practically oozes revengeful hatred (directed towards all males!) in every scene she is. In fact, if she had any more great scenes like she has already they would have to call this movie, 'Snow White VS Ravenna, The Evil Queen'. Go check this out or rent it but DO see it. The only performance similar to it in my mind is the David Prowse / James Earl Jones' (voice) performance as Darth Vader in the 'Empire Strikes Back'. And if you remember, that was a damn good, chilling portrayal of evil at the top of it's game (so to speak).
Posted by GB2000 at 9:39 AM No comments: