You Say Tesseract, I Say Tomato! 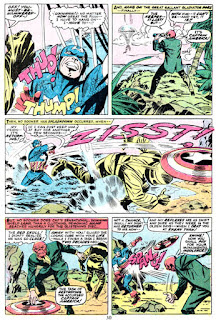 The Hollywood version of A.I.M. was a total let down as featured in the plot of Iron Man 3. Gone was the thrilling designs of Jack Kirby. The yellow jumpsuits. The 'gang of scientists' feel that he imparted to them. An oxymoronic concept. A bunch of men, supposedly scientist -implying free thinking, acting like a common group of thugs!! This is why A.I.M. stood out among the many secret organizations in comicdom. The fact that they were anonymous made them even more dastardly!!

I recall when Captain America fished an A.I.M. scientist out of the ocean to learn from him for the first time about the Cosmic Cube!! the COSMIC CUBE!!! [If memory serves me correctly that's how it happened...] Now that's another gripe against these ratty Marvel movies in itself. Not a once during the Captain America movies did they call the Cosmic Cube the fucking Cosmic Cube!! They called it the 'Tesseract', The 'TESSERACT'?? WTF is that? Sounds like an optometry measuring device or something, not like one of the most powerful devices in creation!!!!

Fake ass Hollywood hipster fuckups! Always trying to make stuff 'realer' -if that's a word. Always trying to 'ground' stuff in what THEY (Hollywood honchos -directors, producers, etc.) believe is better. Who the fuck are they to change great literature (classic Marvel comics)?? Arrogant MFs is all they are.

By calling the Cosmic Cube the 'Tesseract' they robbed the thing of it's fantastic elements. The name is the thing you know. You don't call a 'machine gun' a 'repeater' because it doesn't convey what the damn thing really is. As a friend of mine once said, 'Some people know how to kill the very essence of a thing'. They sure the hell did that with the Cosmic Cube!

There's a bunch of 'Tesseract Apologists' out there on the Internet trying to rationalize why the Cube wasn't called Cube in the movies. That's all B.S. It wasn't called the Cube because of a lack of dedication to comic book continuity --a bad quality that happens when publishers allow filmmakers (arrogant filmmakers) to work on their projects. That's the real reason it's not called the 'Cosmic Cube'! Anyway we'll probably never see it in a film being refered to in that cool way, 'The Cosmic Cube'. At least not in my lifetime I think. Oh well.
Posted by GB2000 at 9:56 PM No comments:

Beauty Gets Her Beast -and Bankability Assurance!

'Beauty And The Beast' Review

Beauty and The Beast, the recent big budget live action film from Disney is what I expected it to be -your typical over-lavish production with little depth besides the occasional moment of inspiration which is quickly extinguished. That's modern day Hollywood for you: all promise, little keep.

Most everyone knows the story of Disney's 1990's animated cartoon version of the classic fairy tale of Beauty and The Beast. But in case you have forgotten it here's a synopsis: Attractive girl which every woman thinks represents herself needs a husband but is so selfish and introverted she winds up falling for a loser prince who has been transformed into a beast by a pernicious (hows that for a Google visit?) witch / sorceress / enchantress -whatever because in her eyes his own narcissistic ways are offensive to her senses of how men (in general) should behave. The only thing that can cure this guy of his new Beasty-looks is the true love of a beautiful woman (strained irony if there ever was any). Which actually shouldn't be that difficult if you take a casual walk around your small town or large city. Gorgeous or attractive women can be found with all sort of ugly guys (beast). So much for that punishment!

Or course I'm being silly about the Beauty and the Beast fairy tale because the whole story is downright silly but awfully revealing about the psyches of some women (most?). They often reject braggart men / accomplished men / even rich men  for more prosaic men who don't challenge their own self's intellectual capabilities or good looks. In short women choose loser or weak men over smart / attractive ones --even if they got big bucks (doesn't mean you get their love, right? Right!)

Now that explains why this story is so damn enduring, doesn't it? And why Disney continues to milk the hell out of it. It's all part of Disney and Hollywood's nostalgia exploiting era that we are all unfortunate to be siting through. How many old TV shows have become awful films in these last 2 decades (since the 1990's)? Too many. And few of them worth remembering; many of them that should be forgotten forever ('Star Wars: The Force Awakens'). Which is [unlike] the 90's Disney Beauty and the Beast. It was really a very good animated film!

So here we are again, in the age of nostalgia exploitation viewing Beauty and The Beast.. It's a too-big for itself film to some degree. The characters actually feel subservient to the landscape / castle that the they live in. It's as if the production team got the go-ahead to design the film without a finished script. So that they would be able to tailor their designs to the specific beats of the film. Keeping backgrounds humble in emotional scenes and going crazy with them in more horrific or troublesome ones. I guess that's part of the Hollywood 'factory film'. Script last, money-grabbing concept first. Hire the artists now, never mind what they design! We'll fit the story to the visuals! Not how good visual storytelling is done, folks. One should make the visuals subservient to the scripts' needs. This 'rule' (because their really are no rules in visual storytelling, only appropriateness) is broken relative to the tempo of this live-action version of the classic fairy tale.

The acting in this film is rather uninspired (showing you that the script is surprisingly dry of any character development). Hiring Emma Watson for the role of Belle is a stroke of genius (and I use that term as hyperbole here). This is her first significant role since she played the intellectual-feminist sorceress-in-training Hermoine in Harry Potter. Now I have to admit that I'm a fan of hers from the start and am glad to see her career advance by leaps and bounds. But I can say in an unbiased fashion that she is perfect for this 'intellectual feminist' version of Belle, for in this version of Beauty and the Beast (this 'version' because everyt ime someone tells this story they either add to it or subtract from it) the character IS a dedicated bookworm and a budding woman's rights activist (she's ridiculed for her reading skills and is berated for her desire to teach a young girl how to read by the stogdy and evil villagers she has to deal with daily). Emma turns in a suitable performance and of course is the real reason to see this 'Beauty and The Beast'. The gentleman that plays the Beast, actor Dan Stevens, is perfect for his role as well. We neither love or hate his beast -so when Belle does fall in love with him we can see that's just the fate for any woman that happens to stumble upon the tragic character and is forced to get to know him (as Belle is when she takes her father's place in the Beasts' dungeon). Another interesting performance is that of Luke Evans. He plays Gaston, the soldier who wants to make Belle into his wife. In feminine psychology he is the REAL BEAST of the story. For his undying 'love' or lust for Belle is seen by Belle and no doubt every other female in the audience as his desire to CONTROL Belle. And most experienced men know that women desire control over their romantic fates more than anything else in life. We are left to laugh at Gaston / Luke Evan's attempts at 'getting' Belle. All the while knowing that it's the strong and silent type who will actually win the heart of the girl (the guy who's had the tragedy in his life, in this tale it's the Prince turned into a hideous monster!).

The directing of this film by Bill Condon is rather uneventful. Nothing really stands out and it appears to me that this may be his first big film for it feels like he may have gotten himself into a 'more than I can chew' situation. Errors in character, plotting, or pacing in the film that can be saved by a clever director go unchanged in this film. But I must digress. I was rather tired when I viewed this film and it is a testimony to the director's skill that I did stay interested in it even though my body was screaming to go to sleep! I didn't snooze during it and what I experienced during my less than tired moments was skilled enough directing to keep me from saying to myself, "Who the hell directed this crap?". So to be fair the film is directed competently and satisfies one of the most important values in visual storytelling which is to hide the hand of the director. It's well hidden and so the story does flow from one logic point to another and that's that. But again, I feel as though the characters took a backseat to the CGI special effects and what-not. [I just Googled this director and confirmed my suspicions. This was his first big budget (i.e. big special effects) film to date. He's an experienced drama director but not fantasy one. Even the 'Twilight' franchise films he directed don't compare to the effects laden film such as this Beauty and The Beast.

All in all this film wasn't too bad. It's a good diversion for an adult or the kiddies. But nothing new will come out of it. The only real winner besides the Disney shareholders is Emma Watson's bankability. She should become the leading lady in future films more often because of this. So good for her!! I am a fan, you know...