Was Men in Black 3 Good? 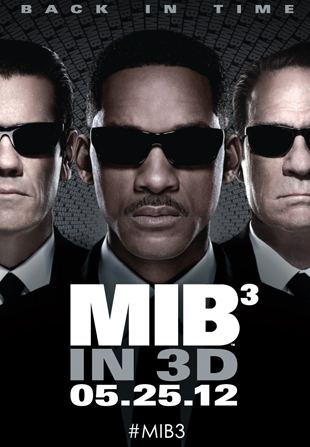 Agh! I tried to watch a late show of 'Men in Black 3' but wound up snoozing throughout most of the film. What I did see I sort of liked. Especially the sense of design within the movie. From the alien creatures to the many locations -all of it looked swell. It's good to know that even though H-wood's story machine is broken down in general, it's design machine (the illustrators, costume departments, special effects companies) is still fully operational. The fanboy-suits that have taken over Hollywood are too idea-focused to truly interfere with the tangible work of visual artists. So they focus their destructive, envious ways at movie scripts and writers. Blocking original ideas, promoting past hits over creating new future ones. This is why we keep seeing all this junk from the past being remade. Fanboy-suits are in control, they want to make movies based on the ideas that gave them hard-ons in the past. To hell with getting a future boner.
Posted by GB2000 at 7:42 AM No comments: 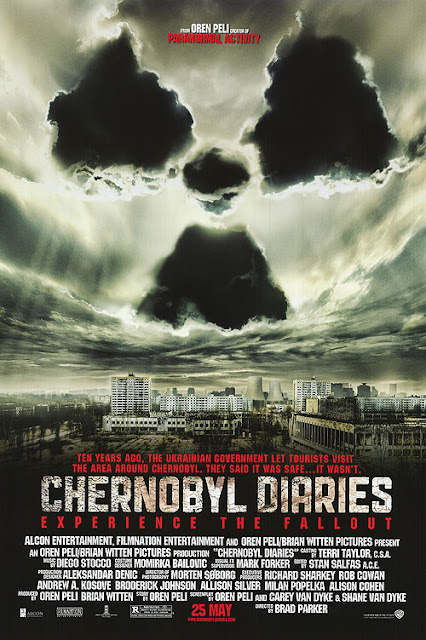 I saw 'Chernobyl Diaries' last night and came away a bit disappointed. It's one of those A-for effort films (you know the kind: as you watch it you are filled with the feeling that this is "kinda good" or you're about to move to the edge of your seat several times during the movie but never really get there...). The film lost it's focus (which should've been gory horror, and not suspense) when it failed to fully show the supposedly radioactive citizens of the "abandoned" city near the infamous Russian Chernobyl nuclear reactors which blew their guts many years ago. This is an example of failure to provide ample coverage of something during the course of a narrative. Show us the damn monster, people! That's what horrific shit is really about -and radiation poisoning is something that involves horrific changes to the body, not suspenseful ones!!! Anyhoo it's an OK time killer. See it if you're rich like me and have over $10.00 to blow (he says with a wink).

Additional: This film was made by the same clowns that made 'Paranormal Activity'. An over-hyped, 1/4th scary "horror film", that showed potential (like 'Chernobyl Diaries') that was never reached.
Posted by GB2000 at 6:18 AM No comments:


Before 'Star Wars' we all used to wonder what adventure in space would really, really look like. Up until then (pre-1977) much sci-fi looked fake, but a good amount was fairly decent, especially after the remarkable leap in special effects brought about in the late 1960s when '2001: A Space Odyssey' debuted. But the sense of adventure was never really captured--never fully realized until 'Star Wars' came out. After 'Star Wars' the sci-fi genre and it's creators finally "got it". George Lucas took some of the best elements of adventure films -wild shootouts and chases, the best of war films -fighter plane dog fights and heavy weaponry, the best of Westerns -the Cantina scene on the planet Tatooine, Han Solo in "cowboy" vest, the best of Romance (the kiss before Luke and Leia swing over the Death Star chasm), the best of auto films-Luke Skywalker, Imperial Stormtroopers, Han Solo, etc. treated their vehicles as 'cool machines', not just a means to an end; and put it all in a place we never thought it could all be found together -outer space! So a big thanks to George Lucas for combining the realistic special effects pioneered in '2001: A Space Odyssey' (made in the late 1960's!) with a longing sense of grand adventure! After Star Wars it all got good and exciting right up until this day. Without 'Star Wars' there would be no 'Alien' or the upcoming 'Prometheus' ('Alien' the movie was deliberately made because of the success of 'Star Wars'). Neither would there be a classic film on the level of 'Blade Runner'. Star Wars proved that comic book ideas and comic book-like ideas were a powerful and unstoppable force in visual storytelling. So again, a big thanks to George Lucas for hanging in there after so many movie studios turned down 'Star Wars' at the beginning. And a special thanks to 20th Century Fox producer Alan Ladd Jr. who green lighted Star Wars not because he thought the story was good or that it would make a lot of money. But for seeing the passion in Lucas' dream to create a space adventure film like no other.

Alan Ladd, Jr. (born October 22, 1937 in Los Angeles, California, USA) is an American film industry executive and producer. He is famous for giving George Lucas the go-ahead to make Star Wars and remained as Lucas' only support at times when the Board of Directors wished to shut down production. He is the son of actor Alan Ladd and Marjorie Jane (Harrold), whom Alan Ladd met in high school.
Ladd received the 2,348th star on the Hollywood Walk of Fame on Friday, September 28, 2007.
He started in films as an agent in 1963. In 1969, Ladd moved to London to produce, making nine films. He returned to the States in 1973 to become Head of Creative Affairs at 20th Century Fox.
During three very successful years Ladd was President of Fox. Star Wars and Alien were a few of the classics during his tenure. But in 1979 Ladd left his position to found his own production company, The Ladd Company. He enjoyed great successes with comedies like Night Shift and Police Academy and Oscar Winners The Right Stuff and Best Picture, Chariots of Fire. The company also produced the cult classic Blade Runner.
In 1985, Ladd joined MGM/UA, eventually becoming Chairman and CEO of Pathé Entertainment. During his tenure MGM/UA enjoyed hits like A Fish Called Wanda, Moonstruck, and Thelma & Louise. Ladd reformed the Ladd Company with Paramount Pictures in 1993 where he produced the hits The Brady Bunch Movie and Best Picture Winner Braveheart.
Ladd is now producing independently with The Ladd Company. 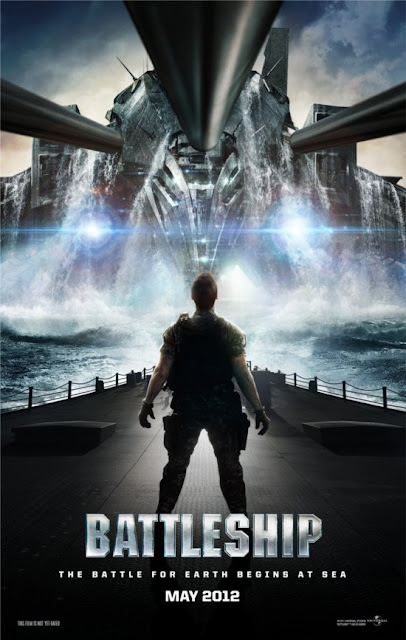 Okay, who the hell out there actually expects Academy Award winning performances off of a film that owes it's existence to a TOY game for goodness sake? No disrespect to the toy industry intended! With that out of the way let me tell you that the new film 'Battleship' was awfully entertaining. WORTH the price of admission, AND contained attempts at actual story / script quality. Admittedly I went into this film with very low expectations story-wise but was surprised at the aforementioned attempts at creating some type of characters to populate this special effects driven modern SFX "masterpiece" of sorts. But in hindsight this is also an indication of the low expectations that so many bad stories from the Hollywood film machine create inside the viewers of their films. We feel glad at even the most meager attempts at quality storytelling in an H-wood movie. That's so damn pathetic. So let me suddenly change the direction of this review, away from the meager story to the most important element ("actor") employed by today's storyless Hollywood industry. We're gonna talk about the amazing special effects and why you should be blowing your hard earned money on films that only want you to see them for their amazing special effects (whew!). Special effects "driven" films are films that are seen for the -duh -SPECIAL EFFECTS ONLY. Now, there's something inherently wrong about this, and any experienced story teller's bones will feel a shiver down the side of them when he hears the words, 'SPECIAL EFFECTS DRIVEN' film. For story quality is king and always will be. But movie going is more than just going somewhere to watch / hear a story being told. It's also just a reason to get out of the house, to be entertained. And sometimes mindless entertainment may be just what the doctor ordered. Sometimes you've been hard at though all day and all night and the last thing you want to feel is the tension and detail overloading of a good quality film (gulp! I can't believe I just wrote that!) But mindless entertainment does has it's place and that place is contrary to quality entertainment. Nothing is absolute and therefore everything will not be of quality. So a person can make use of this and make the crappy films out there serve as a type of psychological getaway of sorts. Well, 'Battleship' certainly fits that bill. You go into this film already armed with the knowledge to not expect anything special or deep. It's 'Snakes On A Plane' but there on a boat this time AND they come from another planet. Hahahaha.

Like I said, this examination of 'Battleship' is about the special effects only. And boy do they lay it on. I'm telling you there's a scene in this film that mimics to a certain degree the sinking of James Cameron's Titanic but it's done to the teeth with stuff exploding, falling, etc. from the upturned ship (as two heroes climb to the front -bow? -of the ship like the lovers Kate Winslet and Leonarda DeCaprio did). In addition to the chaos added to this concept, the camera angle is done in one continuous shot (!). It skims around the ship as it's turning upward, moves past people and things falling into the ocean far, far below, to come up and into the faces of the two Navy heroes who've climbed to the peek of this ship turned into a mountain. Then the camera continues it's "tour of duty" by climbing high above the desperate but determined to survive heroes as they leap down into the ocean far, far below. It's fucking awesome and has to be seen to be believed. So there you go. Battleship isn't the best in visual storytelling but it's not the worst either. It makes you glad (and proud) to be a member of the human race because of these advanced special effects. We are certainly privileged to experience such realistic special effects because just over 40 years ago nothing like this was even conceivable. Rent 'Battleship' for the SFX and have a good time just turning your brain off and taking it all in.
Posted by GB2000 at 4:09 PM No comments: