Limited page by page review of a tale within 'Weird Science' Vol. 2, 1994: reprints of the EC comics classics from the 50's.


"The Gray Cloud of Death!"!!
What a title. Right away I gravitated and read this story out of the dozen or more tales within my copy of 'Weird Science' Vol. # 2. A volume of reprints of the old EC comics classics by Gemstone Publishing.

Overview
I have to admit it. The more time I spend away from this story the more I grew in liking it. At first I was a little put-off by reading an old sci-fi tale, my being a part of the first Star Wars generation (I was 12 years old when Star Wars and it's sophisticated special effects began to mop up everything else done in the genre before it), all of Wally Wood's excellent drawings of the interior hulls of his space crafts, the star ship designs, etc. felt really dated but like I said, it grew on me after the first read and I came to appreciate it a bit more. Although the star ship designs in these past stories were of a continuous type (i.e. big rocket shaped), the romance and adventure contained in that ship design still has a powerful effect on the reader. The elongated, fire belching metal bullet to me is the epitome of the space ship --it captures the essence of adventure and danger contained in space travel in one simple design. Other star ship designs from later films and comic books show mankind's gradual conquering of the dangers of space travel and thus convey less the sense of wanton adventure seen in the basic rocket shape.

The Plot
A followup or secondary exploratory ship to the planet Venus, The 'Venus 2', has arrived at the cloud enshrouded world to investigate it's missing sister craft, the Venus 1. Little does the crew know that their fate will be nearly the same as they come to realize that Venus is more than just a cloud covered mysterious world --it's a deadly one. 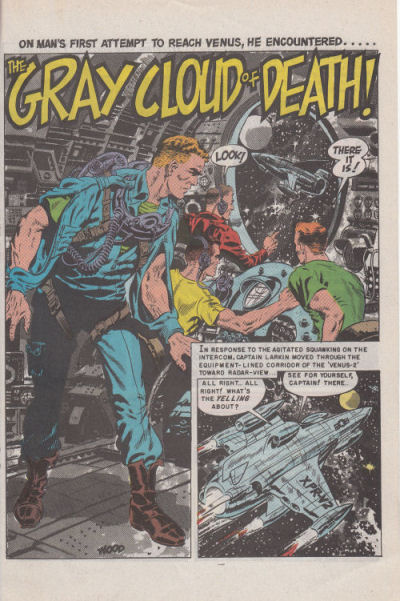 The sudden abruptness of the crew's discovery of the missing 'Venus 1' space craft is readily apparent in the splash page of our tale. Wood's trademark excellence in figure drawing being demonstrated strongly in the huge, lumbering middle ground figure of the Captain Larkin. Although the general perspective of the scene looks a bit cheated / awkward (the Captain actually begins to feel like a giant because of a lack of true perspective in the shot), it's attention grabbing role is quiet effect. Notice Wally Wood's signature at the bottom of the panel -this is something that should come back into style, eh? The inset within the panel is more of an information-based shot of the ship our heroes inhabit, the 'Venus 2'. 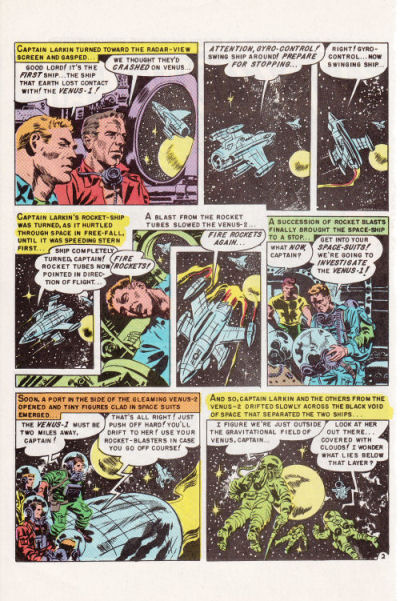 As the Captain investigates the commotion on his bridge he soon discovers that the Venus 1 did not crash on the surface of the world but instead lies stranded in orbit above the planet. He orders the Venus 2's rockets to a full stop and to engage it's thrusters so that they can board the dead-looking Venus 1 and find out what went wrong. On this page, as typical with the best comic books, the strength of the visuals and especially the page's overall composition leads you into the story itself. You don't need any prodding to want to find out what's going on amidst all of these shadow-realized faces and powerful rocket ship design(s). The dialogue is snappy and to the point. Using familiar space ship terminology to give a sense of realism to the ship's maneuvers (by orders of the Captain). "Attention, gyro control! Swing the ship around! Prepare for stopping..." It's not all as technical as I would like it (for instance, get rid of the word 'stopping' and replace it with something more technical like 'engage braking thrusters' or better yet, "Gyro control to command, engaging braking thrusters to slow forward momentum". More tech talk! That's what sells this kind of stuff.

In the lower two panels are examples of the dated nature of the technology of space travel in the 50's versus now. The heroes realize that they are miles away from the Venus 2 and decide to use gun-like devices called 'rocket blasters' to propel themselves to the other vehicle. Depending on how fast the writer and the artist had to crank this tale out (and from my experience as a commercial illustrator, probably not a lot!) they story could have used a bit more imagination at this point. There should have been a smaller landing or docking craft by which our heroes could have used to reach the far away star ship. A teleporter (like in Star Trek) may have been a bit too advanced for a tale about the first explorations of Venus. The writer hints at a more scientific view of Venus within the storyline by talking about Venus' gravitational field and cloud covers but due to the need to keep the story moving no doubt could not divulge any more details about the strange planet here in the comic book (what a pity. A science lesson while reading a good sci-fi tell would've been really entertaining.) 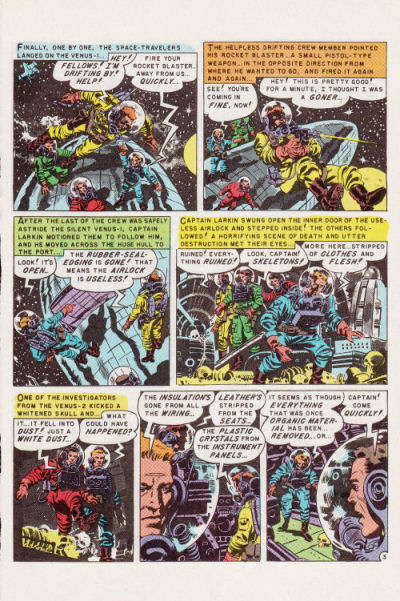 To heighten the drama there's a bit of the almost cliched (at this point) bit about the astronaut in danger of being lost in space forever as one of the crewmen overshoots the Venus 2's hull but is saved by following the Captain's hurried advice. The heroes then discover tantalizing clues as to what happened to the ship. The rubber seal surrounding the adrift ship's airlock is missing! The crew ventures into the star ship still fully suited -which adds to the sense of danger to this vessel. But they are in for a much larger surprise --they discover the ship's crew members dried out bones! What could possibly have done this too them??? Finding dead bodies on a space ship is one of the most gripping sci-fi conventions. Not only are you in the readily deadly environment of outer space, with it's ability to suck the air literally from your lungs, but inside of your star ship --your "womb" if you will --you are still not safe; and your star ship is often your tomb. Most of this page is dedicated to building up a sense of mystery surrounding the fate of the Venus 1 as the Captain and his boarding team find out that the ship's organic compound construction materials have all been destroyed. Only metals and non-organic materials remain on board. Well, that explains the deaths of the crew a bit, doesn't it? 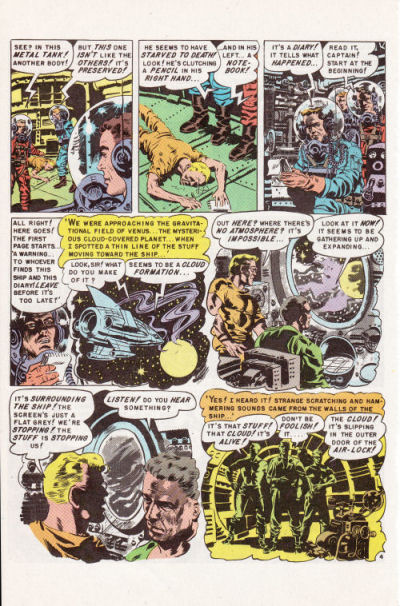 By page four the mystery of the Venus 1's predicament is in full swing. The boarders discover an emaciated man, clutching a notepad. Here is where I find the imagination in the tale wanting. A notepad? You mean the kind that I can pick up at the corner drug store? This isn't very technical nor inspiring. Besides the rocket ship and space suits ordinary things should be made to look more extraordinary also. All things evolve, even a notepad, so I found this little bit of story detail (or lack of it) annoying. Anyway the Captain and his crew read the notes which is described as a 'diary'. Again, this too is a bit too formal or ordinary. Any last member of a dying space ship would probably be keeping a 'journal'. The difference a word makes on the reader is profound. Or maybe call it a 'log' book. Better. Space ship tales, in general, should take their cue from how water bound ships operate. Captains, first mates, lifeboats, hailing frequencies, engine rooms, etc. on a ship are all transferable concepts to space travel. There's little excuse for not making this connection other than the dreaded DEADLINE FEVER, which is what I assume these creators were working on. Also, who wrote this tale???? It doesn't say so at all in the book's credits. I'll check online and update this review. By the end of page 4 our heroes have entered the last thoughts of the last crewman on the Venus 1 as his history is recounted via the reading of the notepad. It seems that the planet's cloud cover is not inherently harmless but shows signs of being an INTELLIGENT ENTITY!!! This knowledge changes the dynamic of the story entirely. For now we get a glimpse of WHAT could have killed the crew of the Venus 1. And not only a WHAT but a WHO if the thing (clouds) are actually alive.

Page 5-8: Without giving away the rest of this short little tale, the crew of the Venus 2 find themselves at war with the deadly living clouds of Venus itself! And who do you expect to win? The crew?? Then you're a fantastic optimist! Although most people can see the end coming (especially from a dated sci-fi tale like this one in which nearly everything from outer space wanted to and did eat people), you still need to find out how that end came about (which is the basis for all modern day motion picture previews I might add!). So get your butt on the Internet and Google this story's title. Track it down to a comic book dealer and order it! There are plenty of stories within this volume of Weird Science that I'll be reviewing next so it would be great to have someone reading them alongside me. Until the next review, stay clear of the deadly clouds of Venus!