From 'Star Wars Original Trilogy Appreciation Page' On Facebook and Blogger... -WARNING! I put down bad or mediocre Star Wars products harshly. So if you don't like people talking both bad and good about Star Wars you won't like my SW Facebook page!

Audio Star Wars Only Is An Experience In And Of It's Own!

Before Star Wars you couldn't get a kid (or many adults) within 20 miles of ANY classical music. Then after the movie debuted young people were rushing to the stores and buying up the Star Wars album like it was a Beetles recording!! Hahaha.  I was among them! Up until then I filled my days with Rock and Roll only! Well SW ended that. There were TV news spots showing the album flying out of music stores faster than they could restock them! From there us kiddies went to the other classics like Beethoven and  Wagner, etc. Wow, quite an amazing effect! If you've never just listened to the pure music of the soundtrack then you're missing out. And 'Princess Leia's Theme' belongs right up there with the greatest classical recordings in history (my humble opinion!). So HEADPHONES ONLY this album and get that SW wow in a whole different fashion! You will not be disappointed!

Every Star Wars Original Trilogy fan should be aware of one of the most influential science fiction painters / designers in history, Chis Foss. He was very active in the publishing and film industry during the time that George Lucas was creating his Flash Gordon knockoff adventure, Luke Starkiller!!! Which ultimately grew into the greatest cinematic space adventure of all time!! It's obvious from the starship on the cover of this book -a Chris Foss painting -where the inspiration for the awesome Star Destroyer may have come from. In fact, Chris Foss did speak to at least 2 representatives of the studio in charge of Star Wars (20th Century Fox) at the time and low and behold. A triangle battleship for the Empire!! Coincidence??? Or The FORCE of Chris Foss was with them...!?? 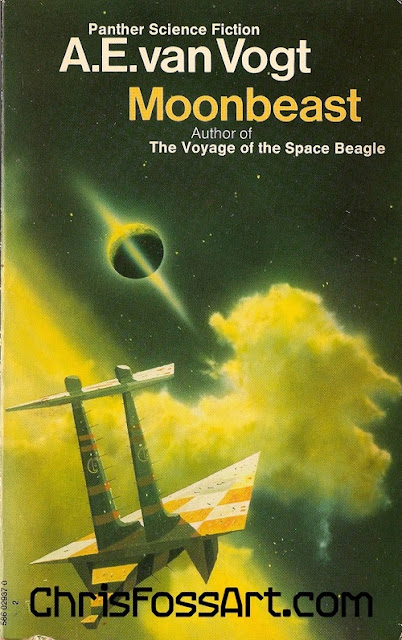 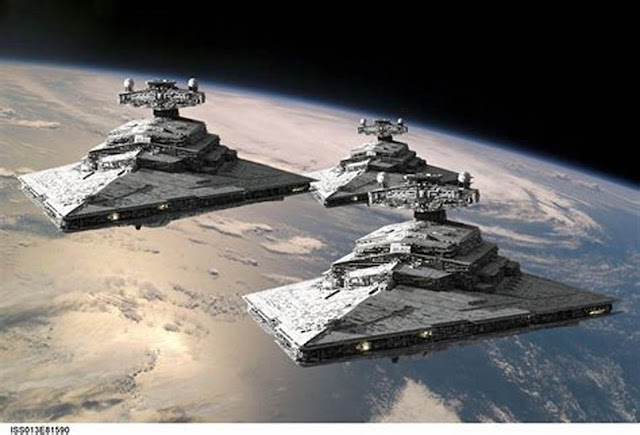 Chis Foss' artwork has the ability to stagger you with it's abrupt feeling of authenticity. It's 'if a tree fell in a forest does it make a sound if no one was there' state. It's as if you interrupted delicate, highly planned alien procedures and took illicit photographs of the event!

Notice the patterning, the subtle dirty colors and weighty parts and angles of his otherworldly machines. His work inspired many an artists to make the future look dirtier, heavier... USED. No doubt George Lucas was influence also by this powerful artist! 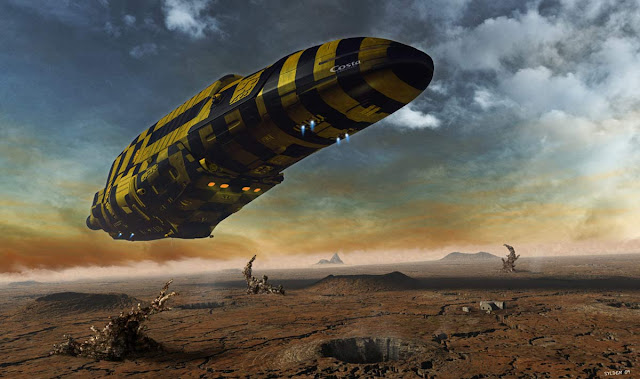 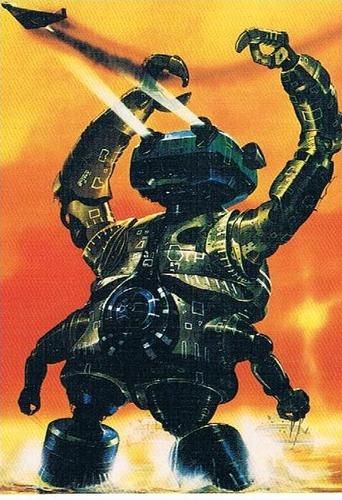 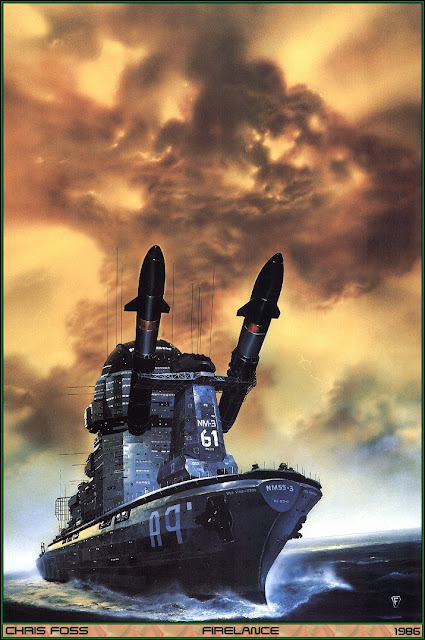 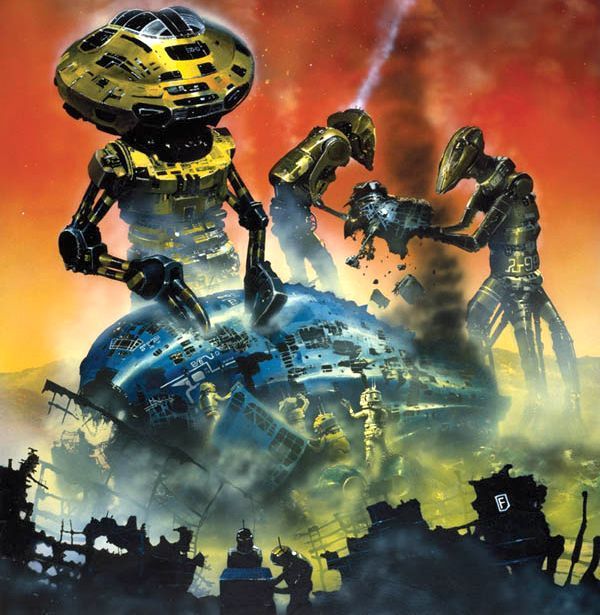 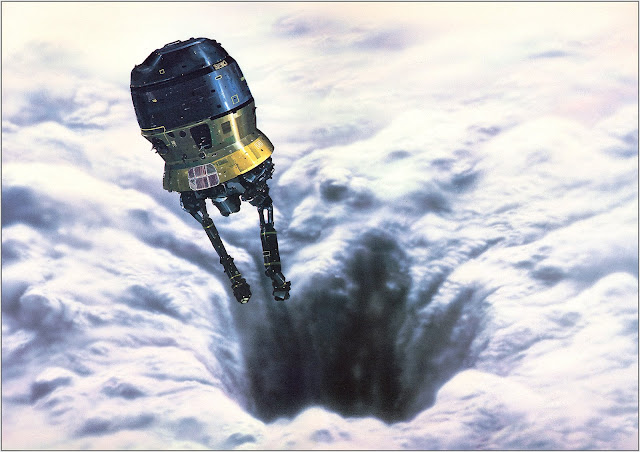 This one (above) is very similar to the Imperial probe droid that landed on Hoth and revealed the Rebel Alliances base to Darth Vader! Don't know if it was made before or after 'The Empire Strikes Back'. Will have to check that out! In any case, great stuff! 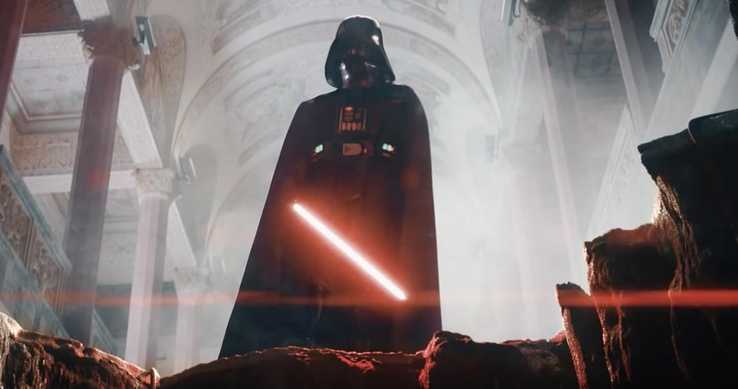 Fans are upset that the creator of a Star Wars fan film didn't get any money from the music that Disney sued him over because of an alleged copyright infringement. But why??? You are already using COPYRIGHTED AND TRADEMARKED MATERIALS to make your Star Wars film and YOU WILL GET MONEY FROM IT AFTER IT'S BROADCAST ON YOUTUBE. Why is everyone shocked that this system is perceived as two directional by the people that own the legal rights to it?? They should be able to make money off of YOUR MOVIE too WHICH HAS THEIR SUBJECT MATTER IN IT.

Disney has done no wrong. In fact this is revealing: more companies are going to start taking control of their content from the fans BECAUSE (I'm sorry to bust your fanboy bubble) YOU NEVER REALLY OWNED IT. It was on loan and the loaner (or LOAN SHARK) is coming to collect. And he's got the corporate muscle to do it.

Up until now corporations have been at a loss on how to deal with the rampant theft, plagiarism, copyright and trademark ripping on the Internet. Seems like they've finally figured it out: You make it, get your Youtube chump check -then we take it and make some real bucks off of it (after the lawsuit -of course!)